Implementing complex color relationships can be challenging. Provided here are some methods and techniques to help solve your product’s color and theming needs.

There are two ways to implement the layering model in a theme, either by using explicit tokens or contextual tokens. These techniques can be used independently in a product or can be used together. Both methods produce the same visual result, the difference lays in how you develop with them. Designers only need to be concerned with the layering tokens.

The explicit layering tokens are standard design tokens. Each layering token corresponds to a specific layer on the page and is used exactly like any other token from Carbon. Contextual tokens are a special case of layering tokens where the value changes depending on where the token is used on a page. This type of token is incredibly useful for building reusable components that work across layers. 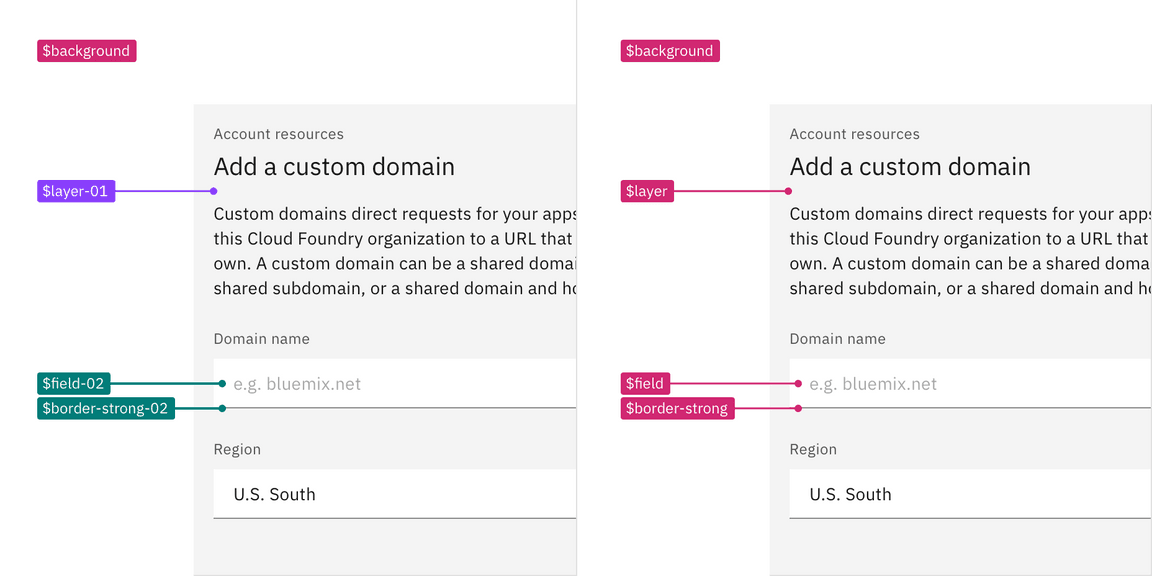 Layering tokens are explicit tokens used to manually map the layering model onto components. They are used just like any other color token, and in fact, are a replacement for the ui color tokens from v10. Layering tokens come in predefined sets that coordinate with the different layer levels. For each layer that a component needs to lives on a separate component variation must be built using the tokens from that layer set.

When to use layering tokens

There are four layers within a theme: base layer, layer 01, layer 02, and layer 03. Layers stack one on top of the other in a set order. Each step in UI color (excluding interaction colors) is another layer and will require the use of a different set of layering tokens.

Migration note: Previously, in v10 most color tokens had numeral endings, now in v11 only layering tokens will have this distinction. For more information, see the migration guide.

Layering tokens are divided into sets and are identified by a number (-00, -01, -02, -03) attached to the end of token name. Any token with an -01 ending belongs to the 01 layering set and so on. The exception are tokens in the base set which use background tokens without a number ending as well as tokens with -00 classification.

Tokens from the same set are used together when building components. For example, in a dropdown both the input and menu will use tokens from the same set (see image below). In addition to the $layer tokens, layer sets also include border and field tokens, as well as interactive states tokens. A field is considered a layer on top of the background it is placed on, for example a field placed on a $layer-02 background will use $field-03. Border tokens however, pair with its same number, for example $field-03 pairs with $border-strong-03 in a text input.

Not all color tokens are part of a layer set. Some tokens groups, like text and icon, work across layers. For a list of the layering tokens, see the color usage tab. 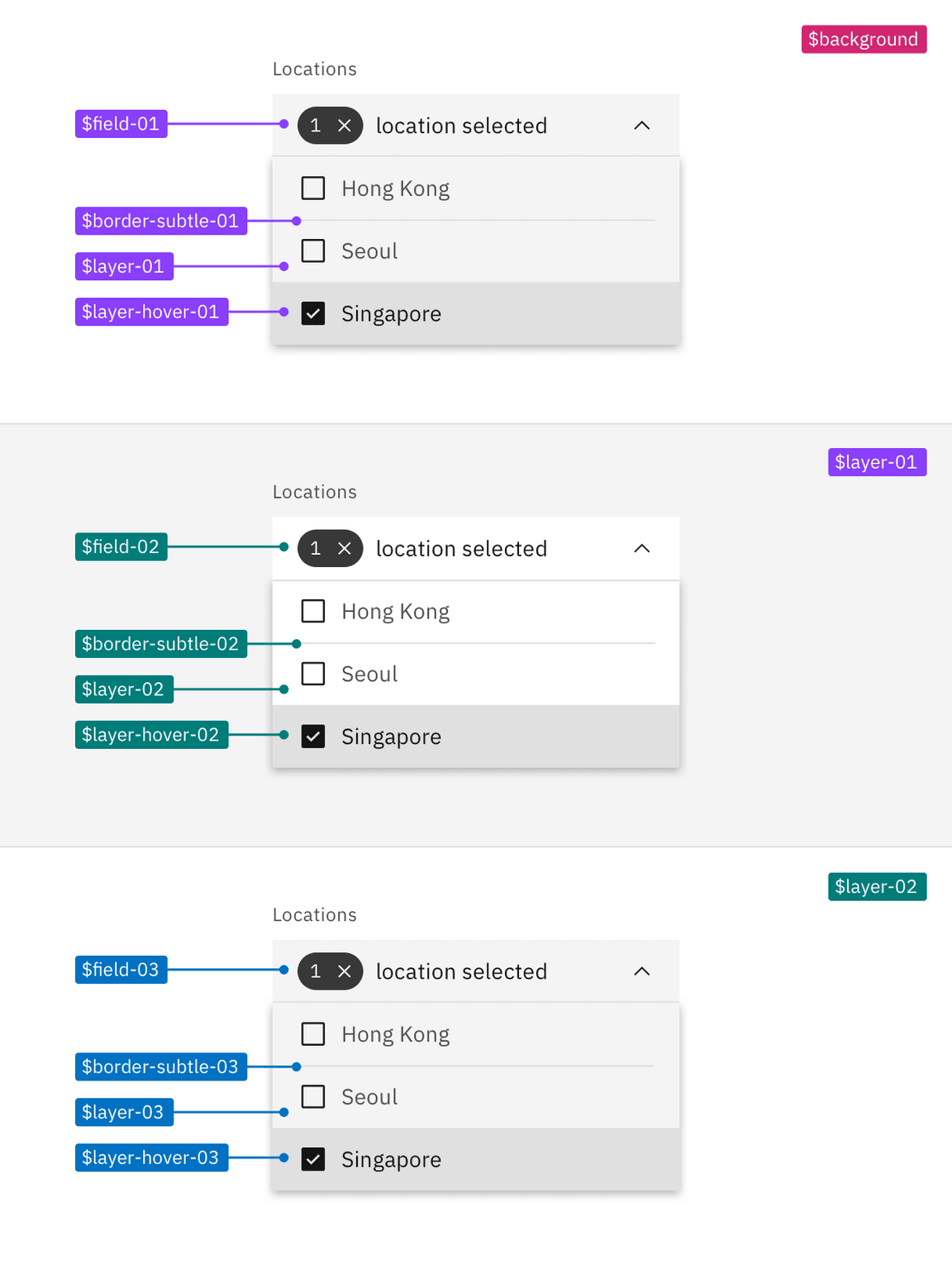 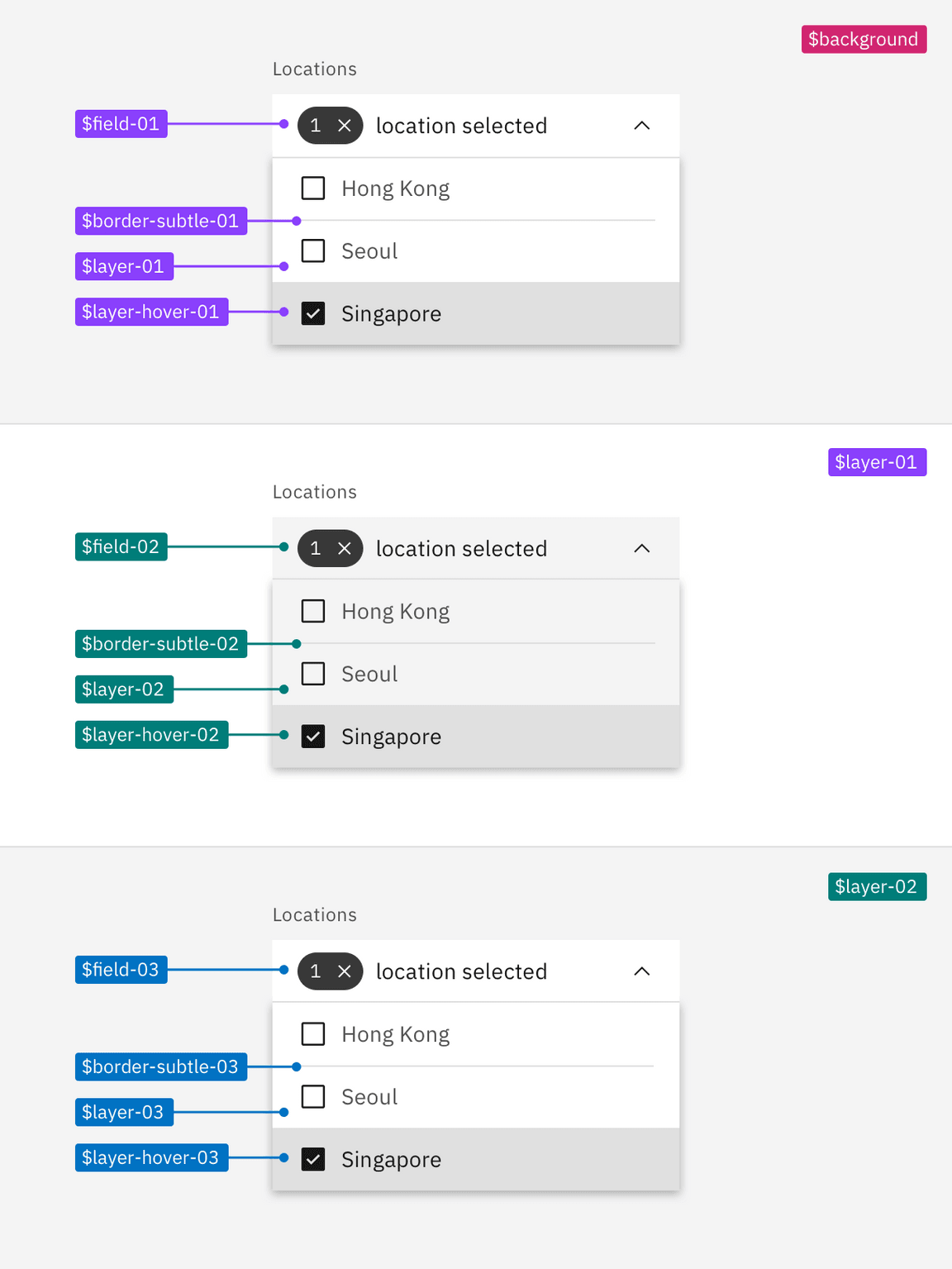 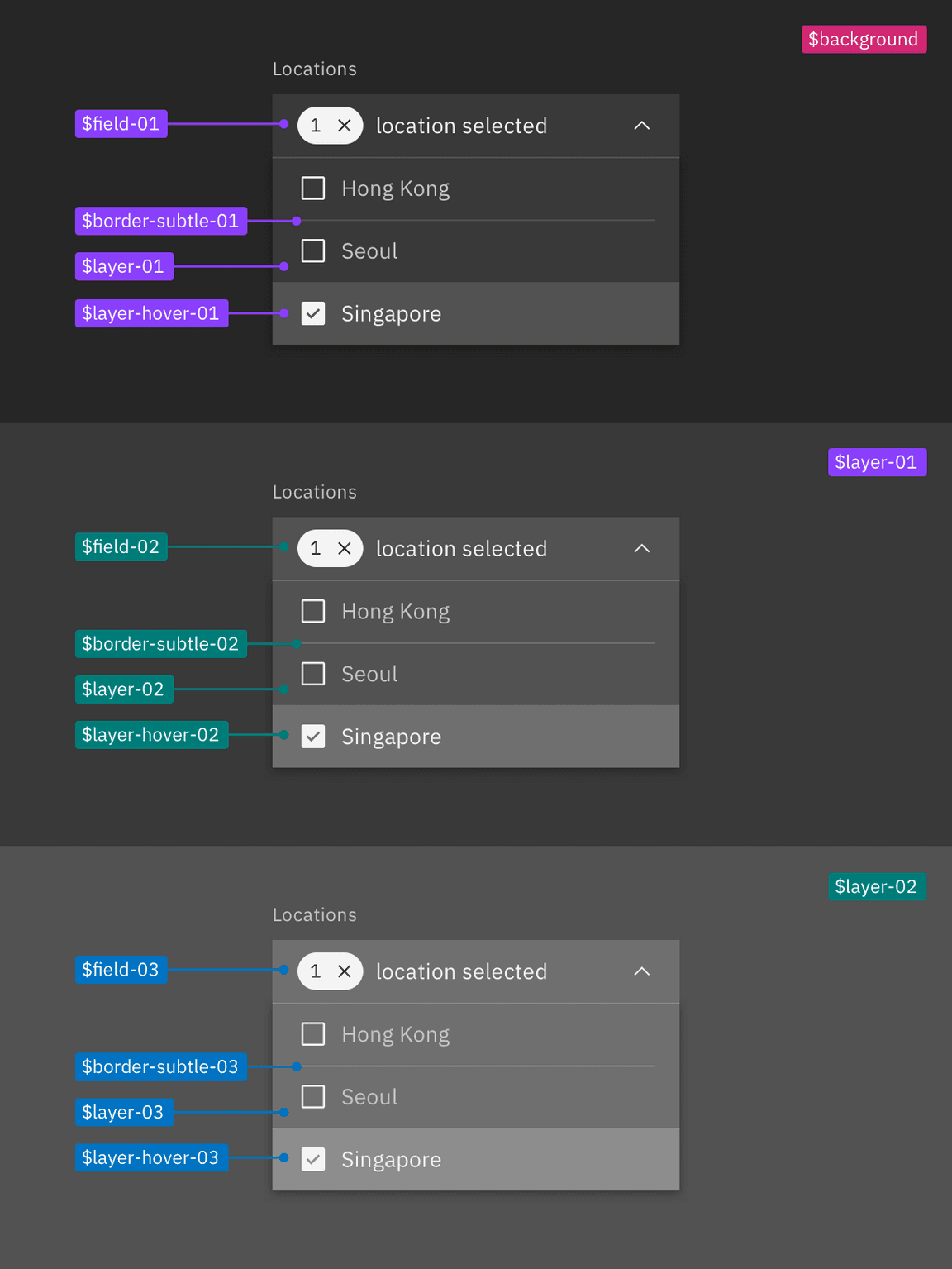 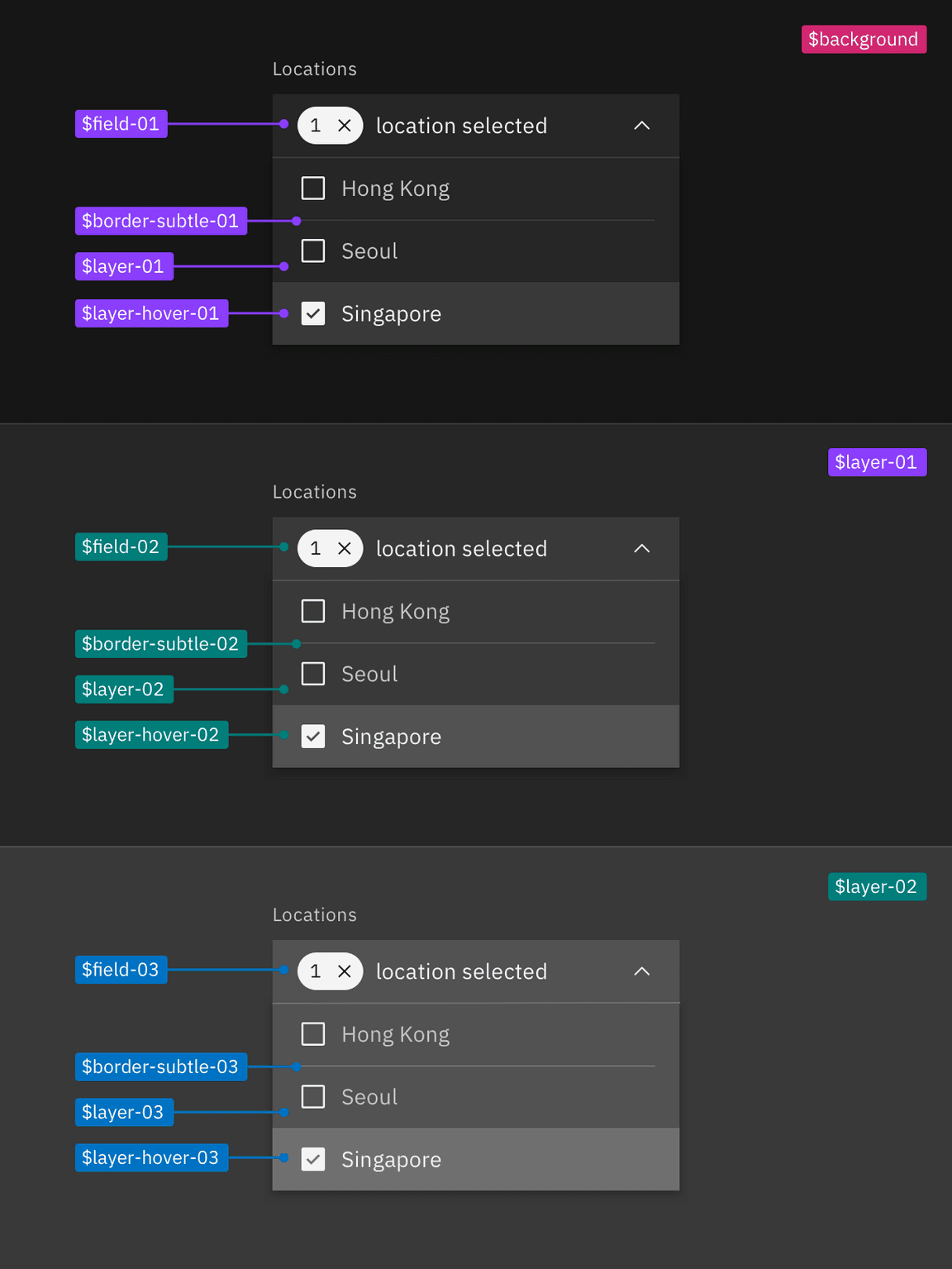 Applying layering tokens in a layout

Referencing the image below, the starting base layer is the page area behind and above the tabs; it uses $background from the base set. The tab component is layered on top of the page background to create the first layer. The selected tab uses $layer-01 and the unselected tabs use $layer-accent-01 which is not considered a proper layer but a supporting color for $layer inside of components. The tab content area attached to the selected tab is also only one layer above the base and so also uses $layer-01 as its background. 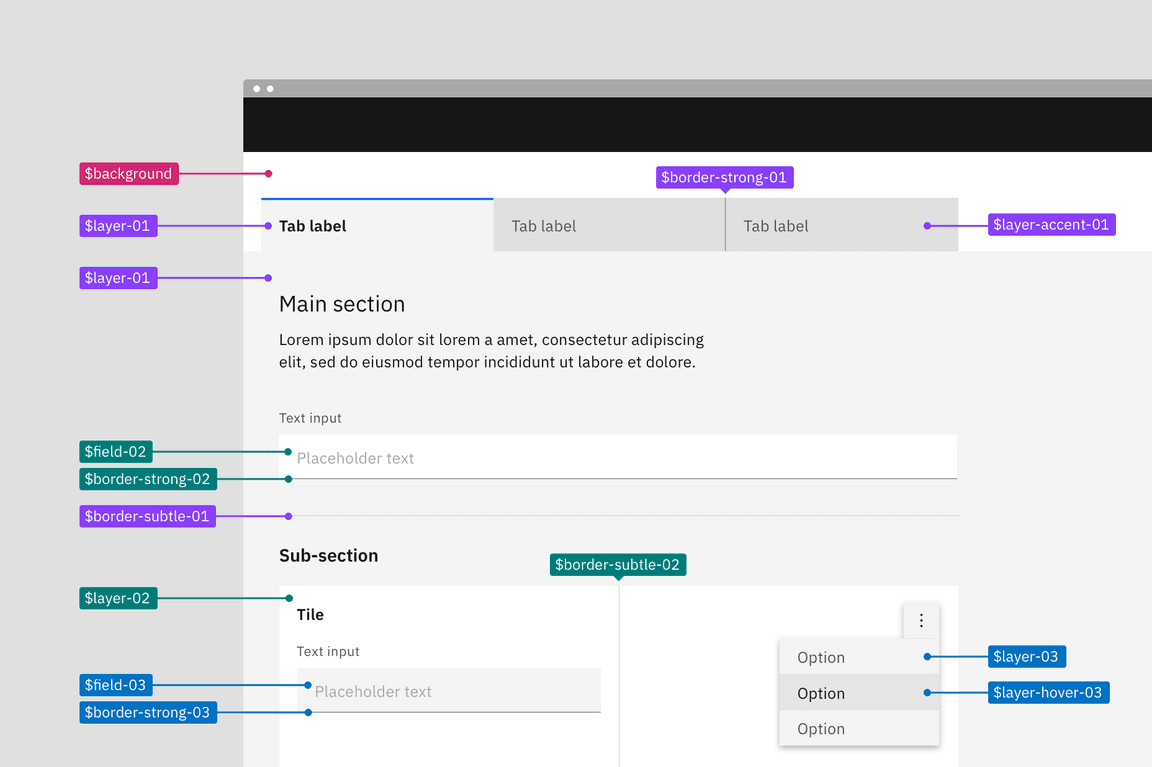 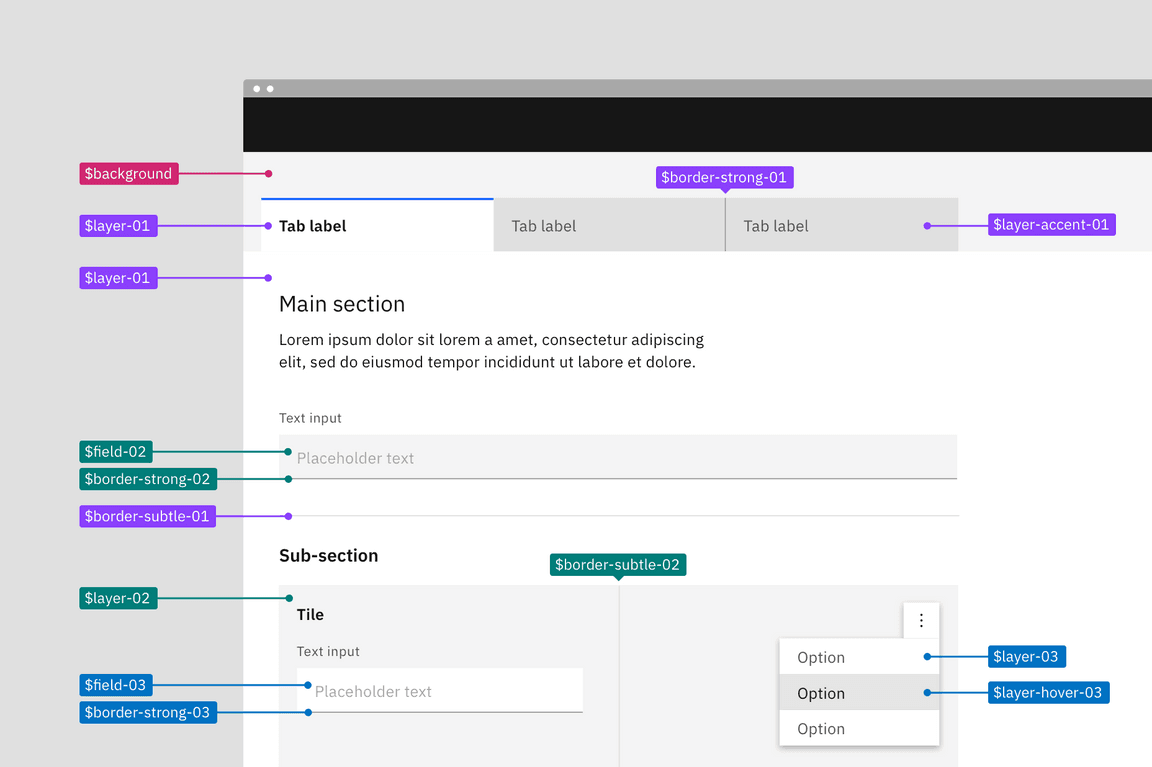 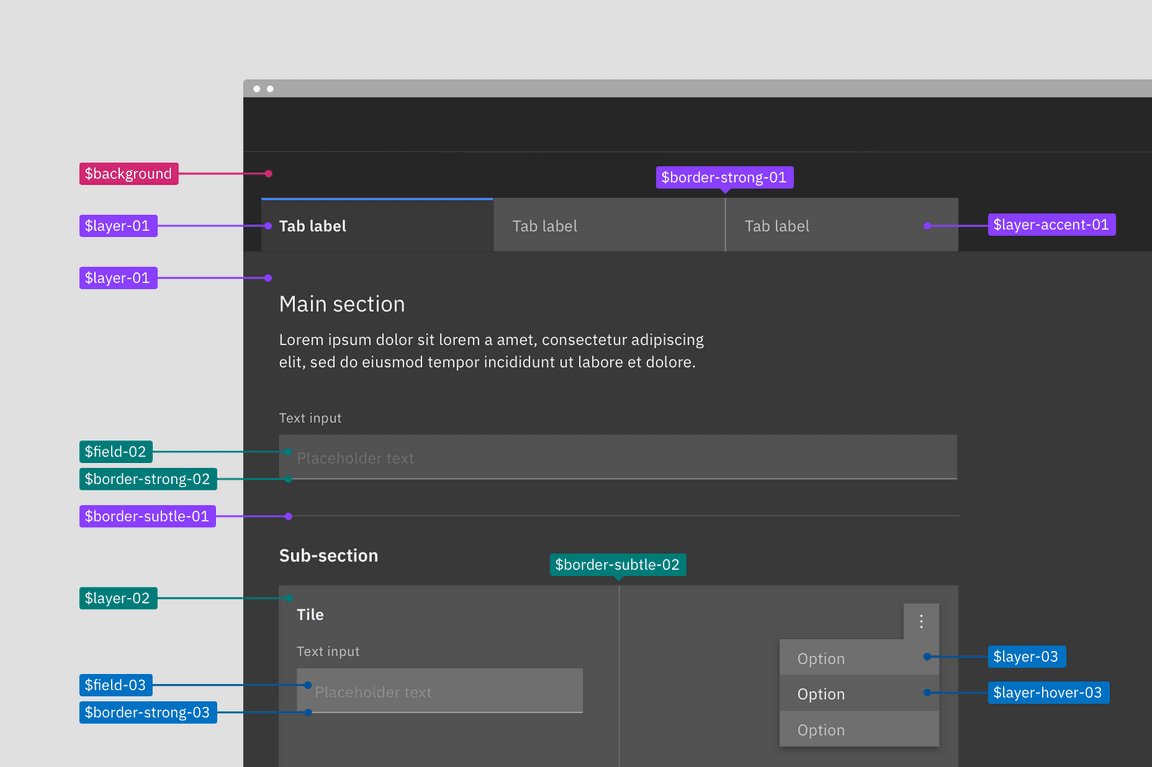 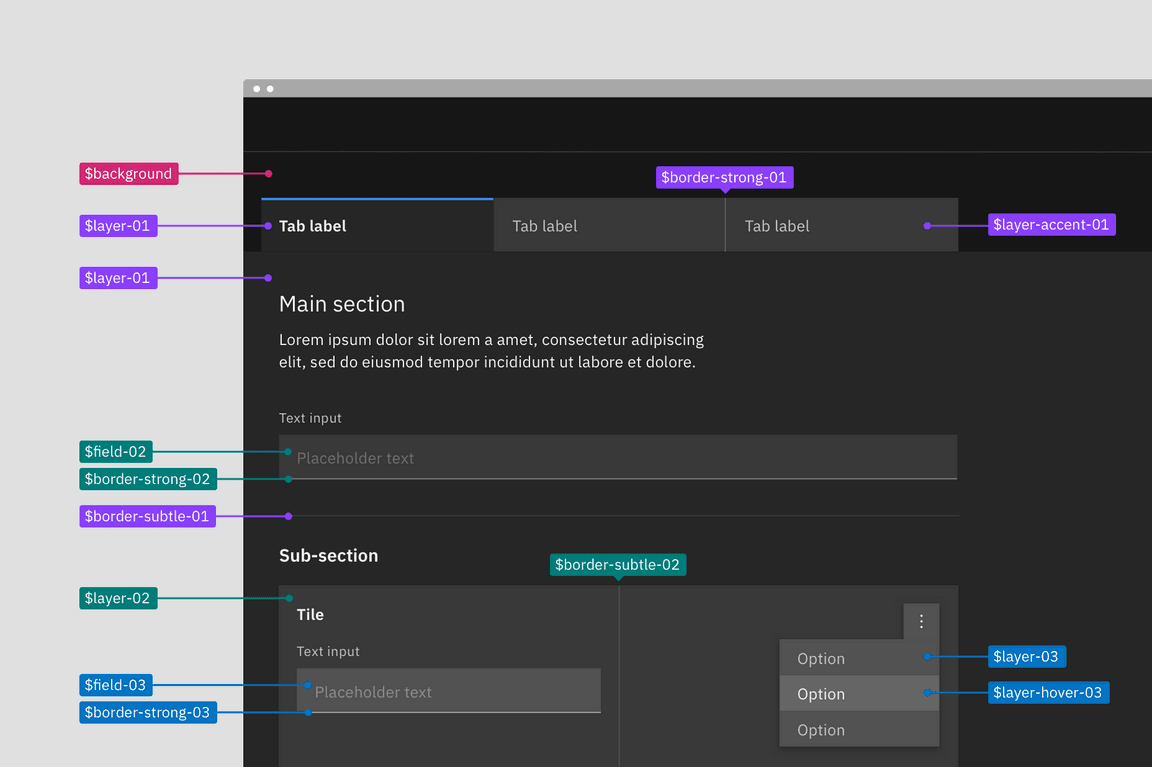 Building components with layering tokens works just like how you would have always built component color variations in Carbon. For each layer that a component lives on, a separate component variation must be built using the tokens from that layering set.

Spec each component variant with its corresponding layering set. For elements that are not part of the layer sets like type or icons, apply color tokens as you normally would. Non-layer tokens will be the same across variants because they have enough contrast not to need a change with each layer.

Migration note: In v10, the additional color variants were known as the light prop variants. The light variants now use the 02 layer set. These new tokens also allow for a third color variant using the 03 layer set in components that was not possible in v10. 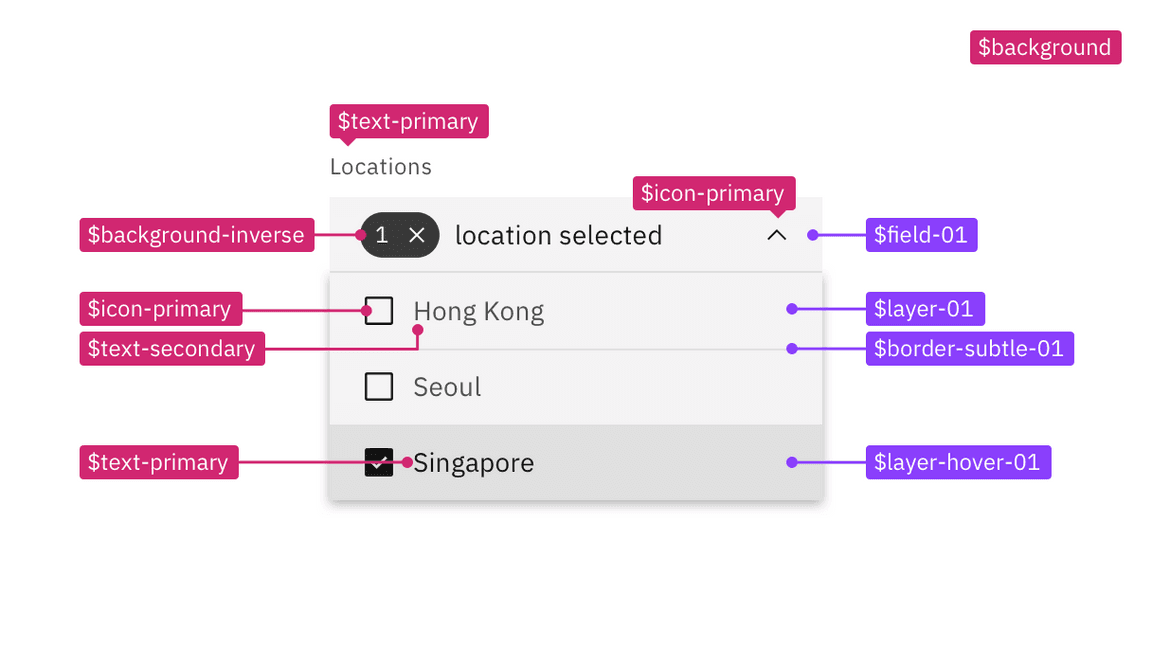 Contextual tokens are code specific tokens used to automatically map the layering model onto components depending on where it used on the page. A contextual token is aware of what layer it is placed on and will call the correct values for that layer. There is only one set of contextual tokens and they require only one component variant to be built.

When to use contextual tokens

Layering is still possible using the contextual tokens. However, the value of the token is not fixed per theme like with a normal design token from the layering sets. Contextual tokens have a variable value within a theme that is controlled through the use of a special component called the layer component. 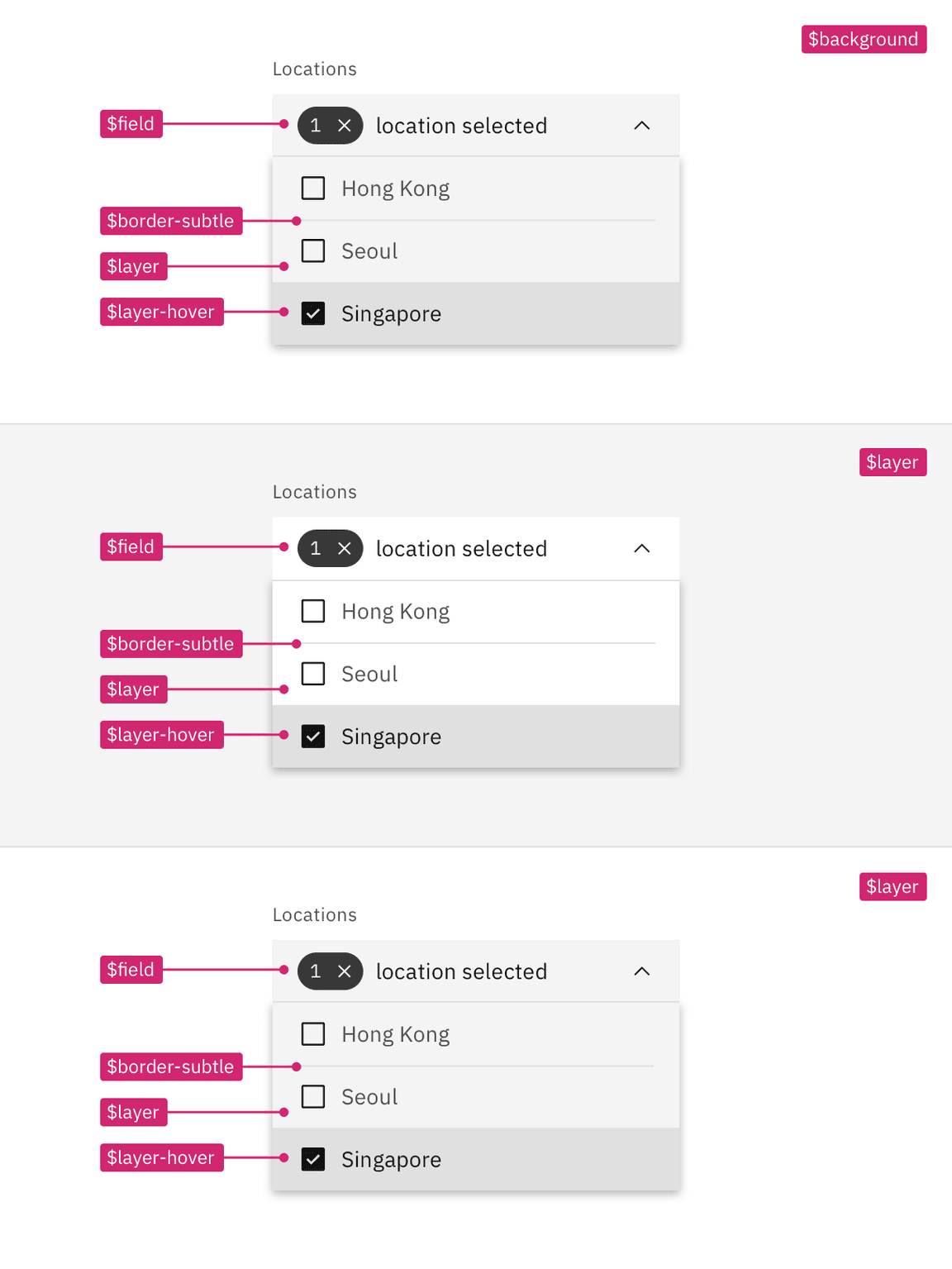 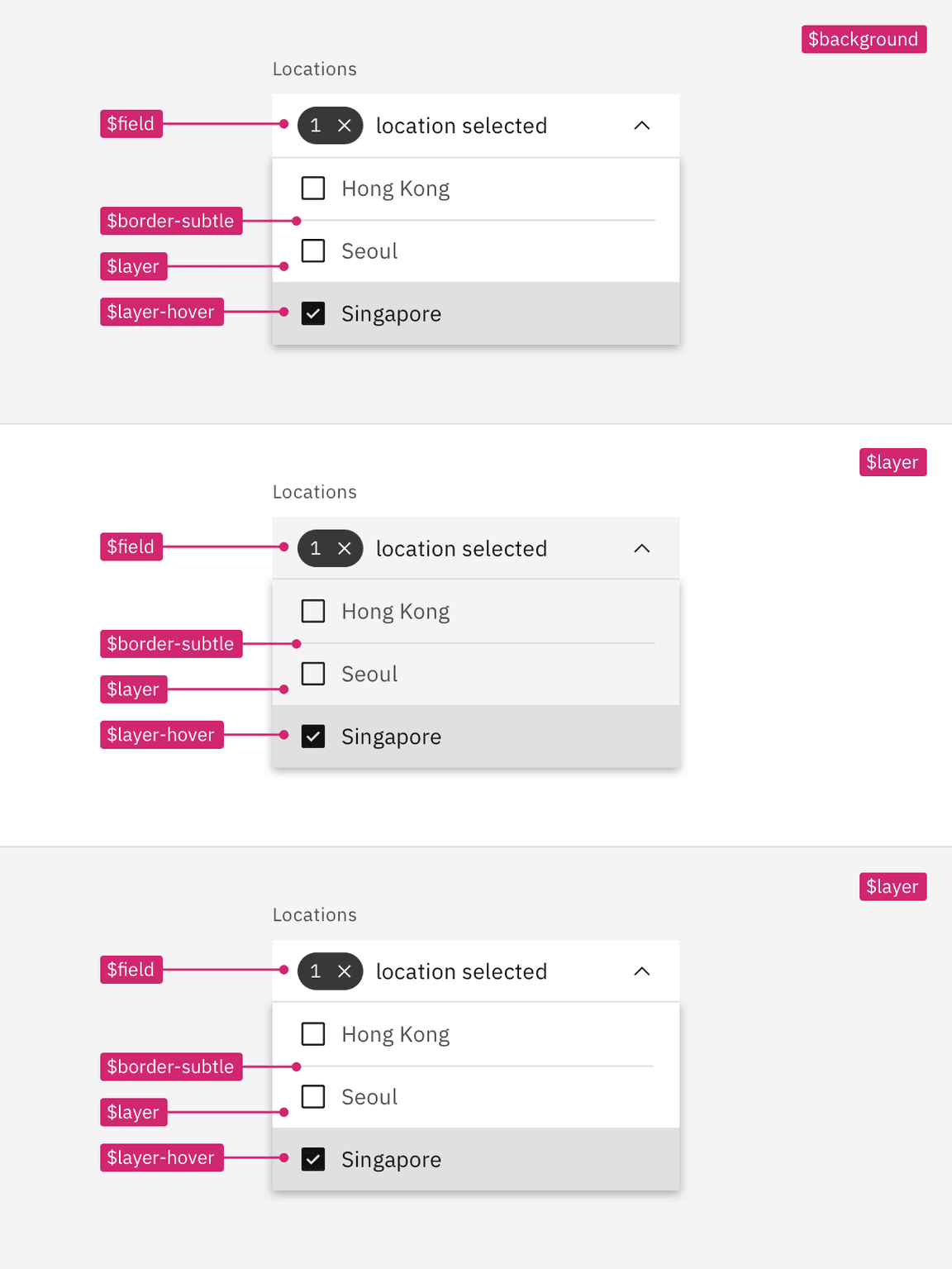 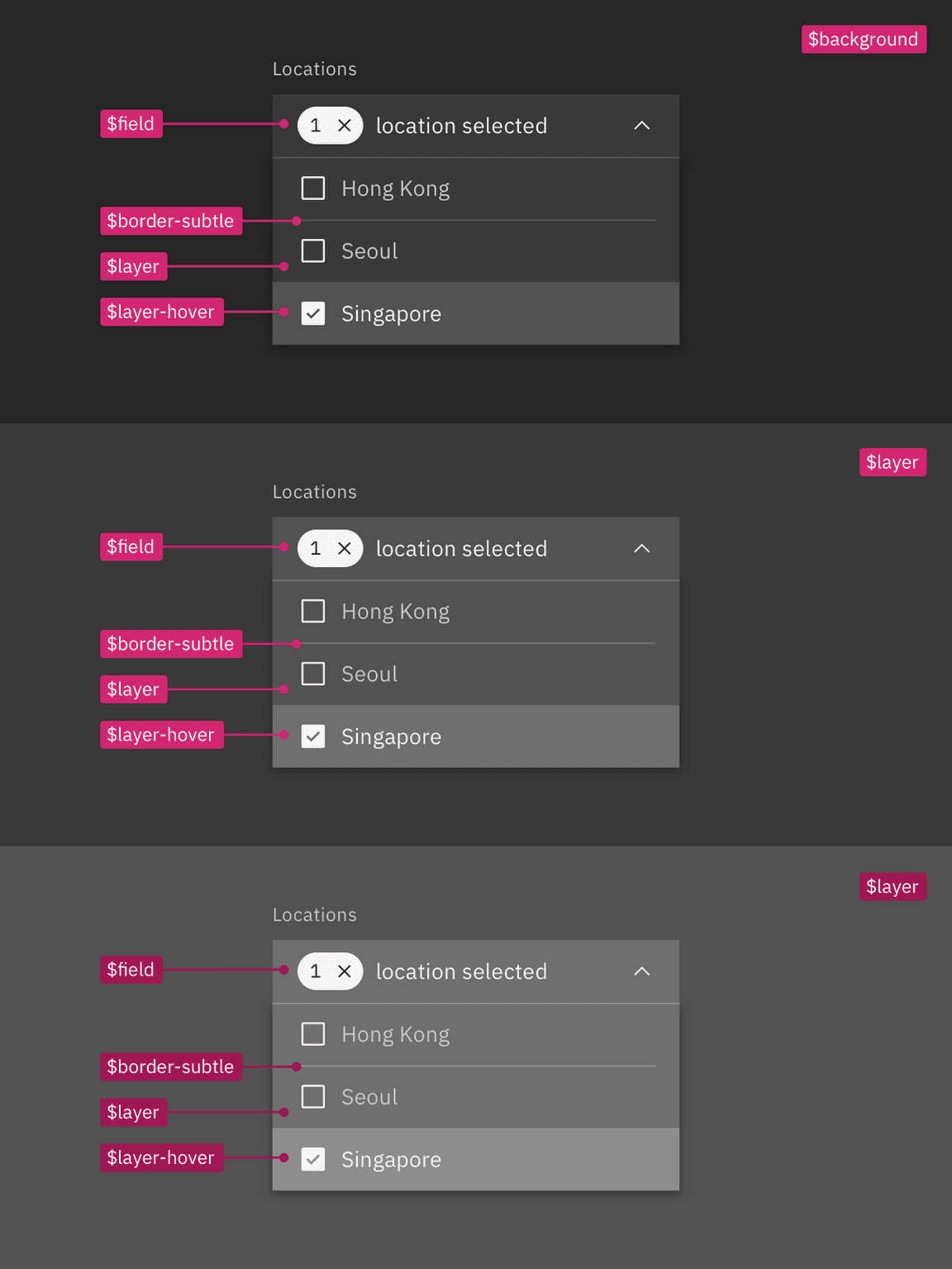 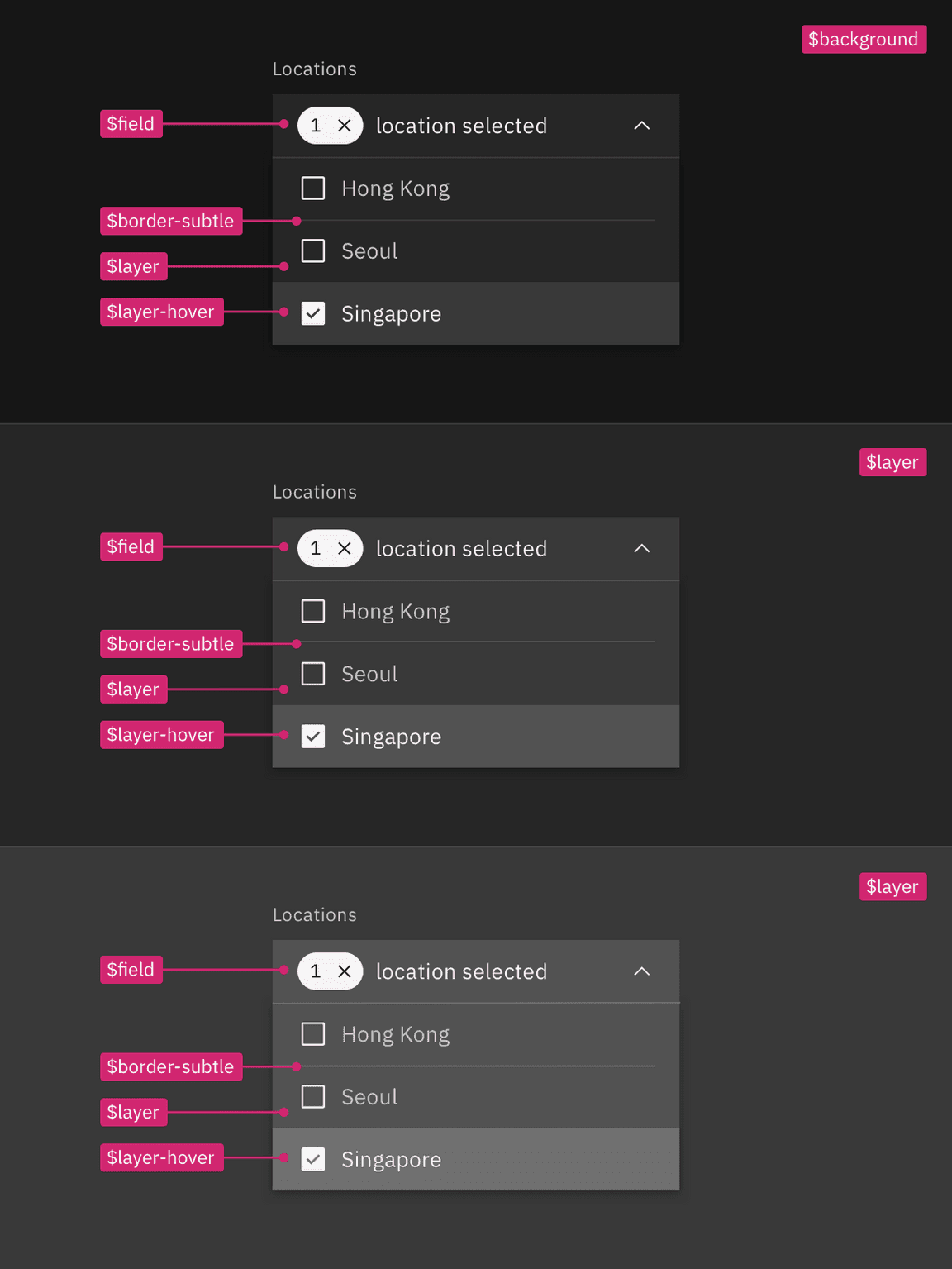 A dropdown across three layers in a theme, all using the same contextual tokens.

For more guidance on the layer component, go to the Storybook. 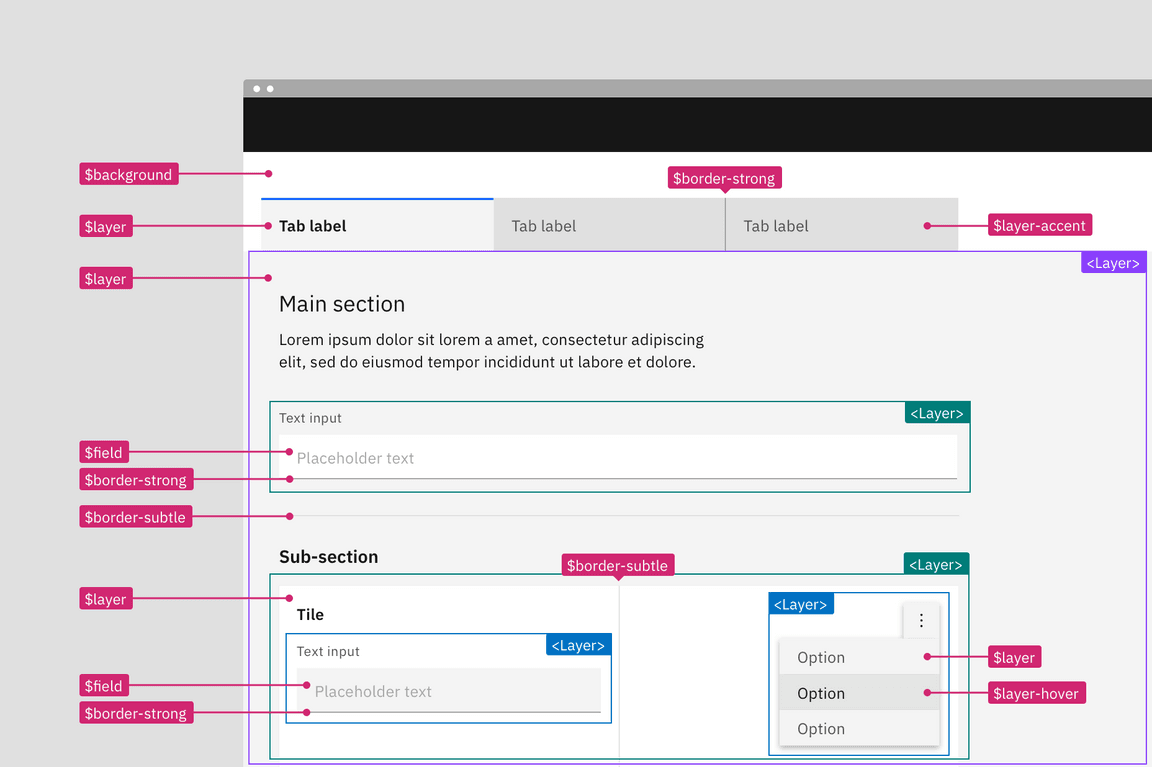 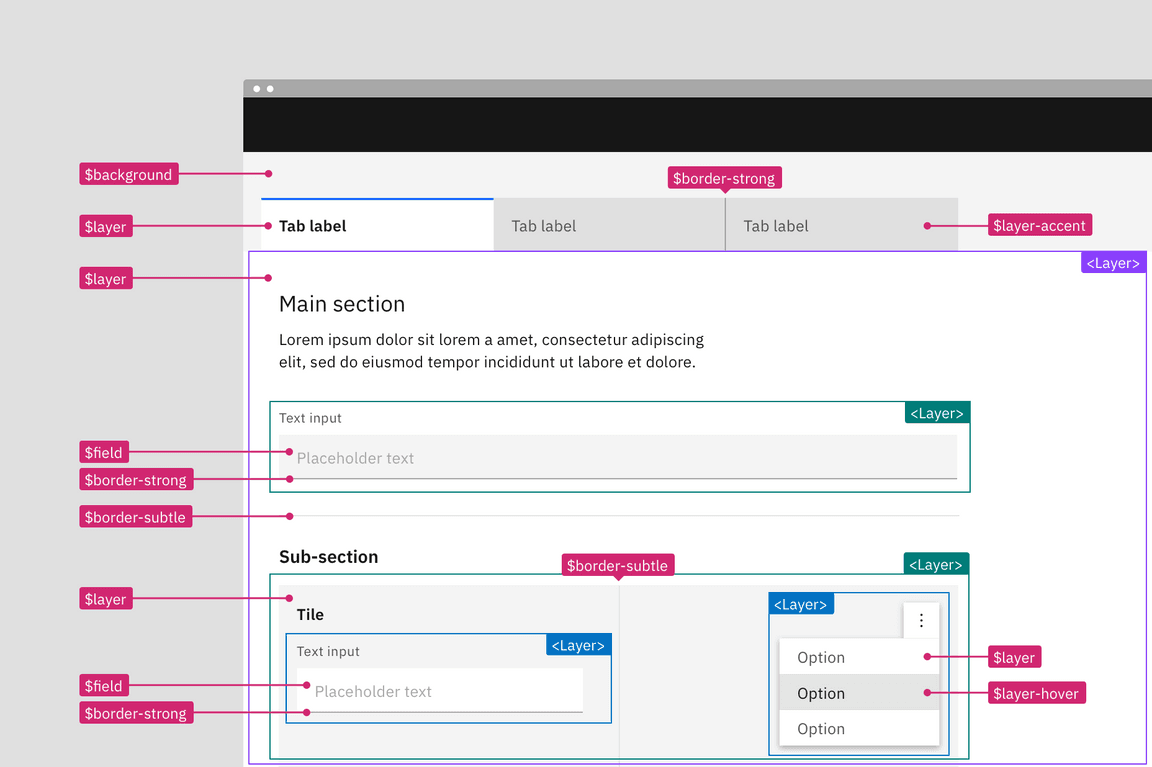 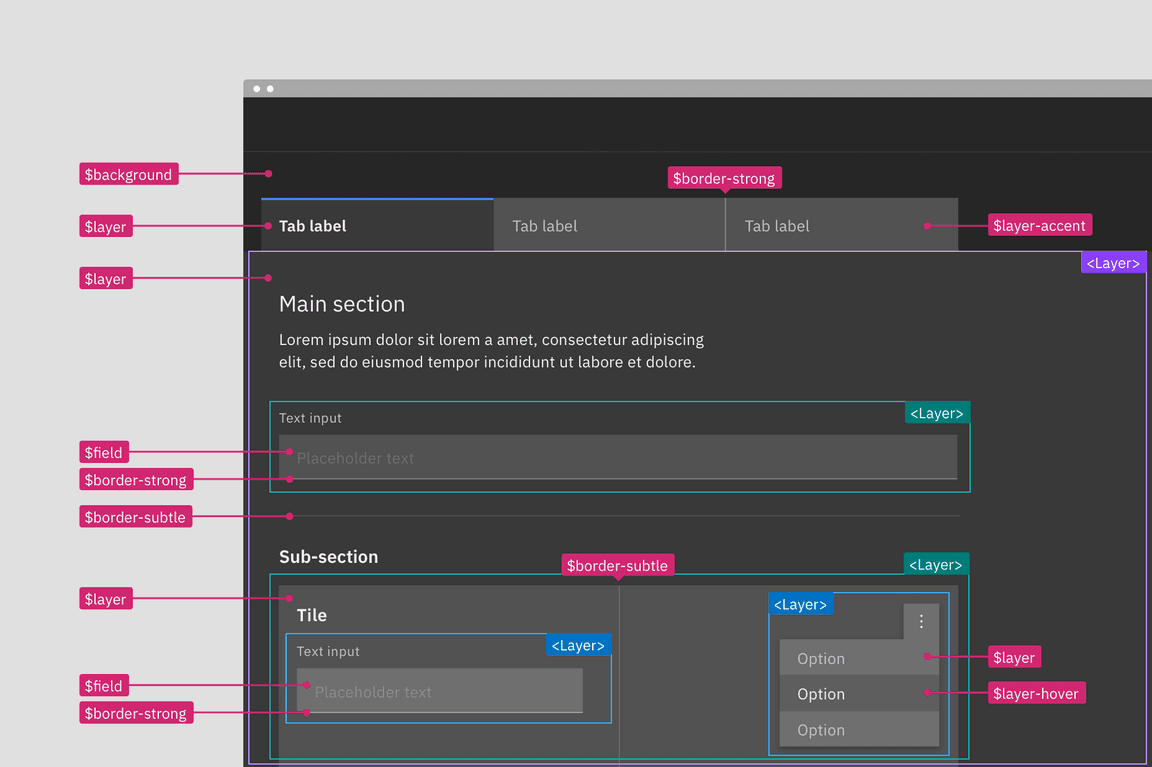 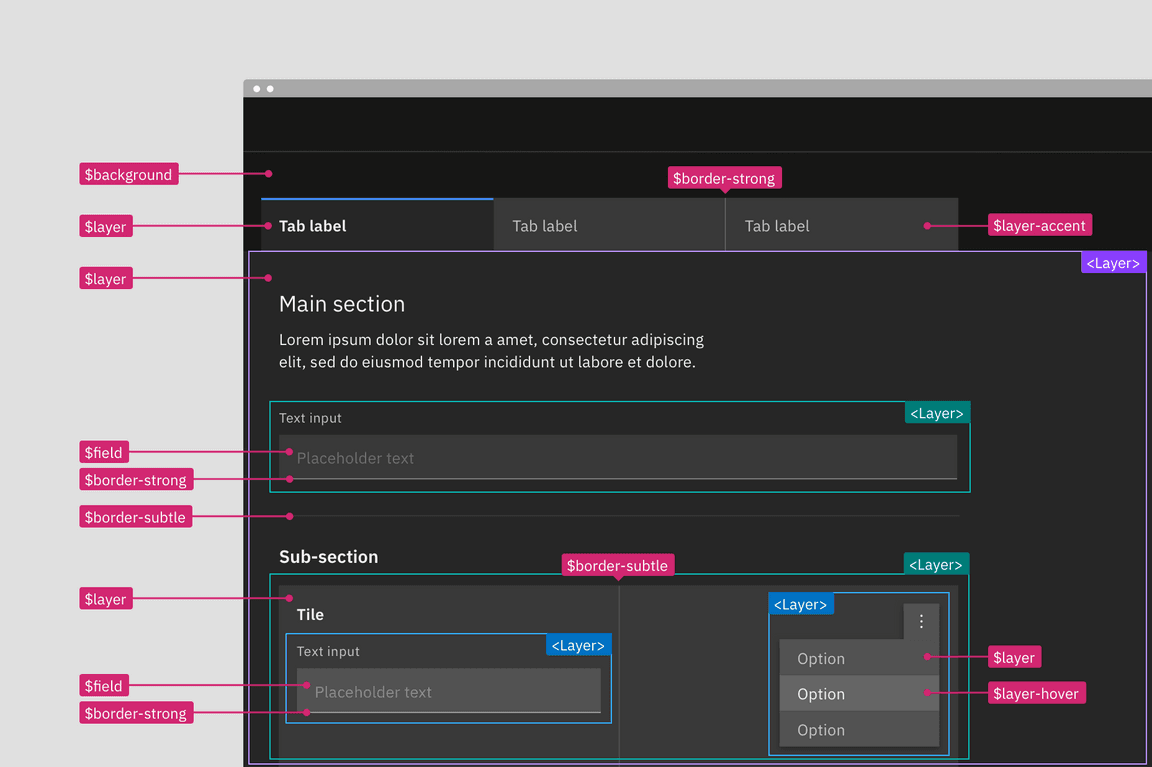 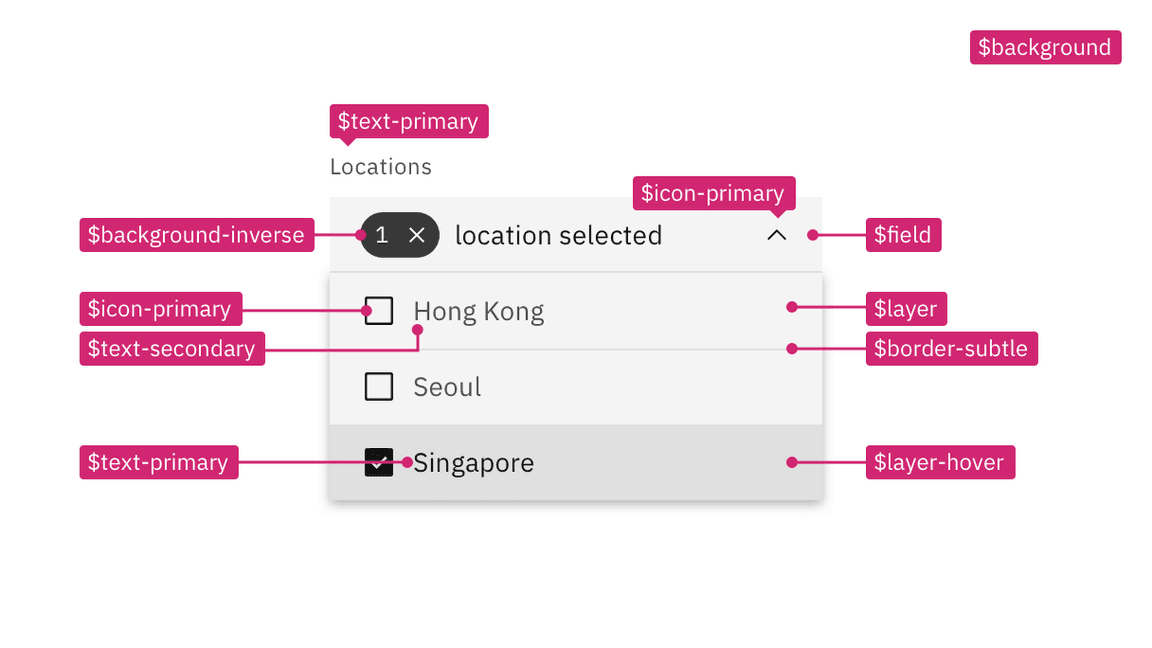 Inline theming is used when a section of a UI needs to be a different theme from the rest of the page. Inline theming allows themes to be nested within each other without needing custom styles or overrides.

In product, a common use-case for inline theming is applying a contrasting theme to the UI Shell or side panels. This is especially common in light themed products or light modes. For example, the majority of a page may use the White theme while the UI Shell and the right side panels use an inline Gray 100 theme. This type of theme pairing creates a high contrast moment that can add emphasis and focus to a work flow.

When to use inline theming

Only use inline theming for major shifts in color, like high contrast moments. The more subtle transitions of color in a product are handled within each theme through the layering model tokens. It is unlikely that you’ll need to inline a White theme within the Gray 10 theme or the Gray 90 theme within the Gray100 theme.

In order to implement inline theming, you must use the Carbon color tokens and themes. For the section of the product you want to inline theme, simply apply the core Carbon tokens like you were doing for the rest of the page, then wrap the targeted section in the Theme component to assign a new theme.

The theme component allows you to specify the theme for a page, or a portion of a page. It is most often used to implement inline theming in order to specify what theme a section of the page should render with.

For more guidance on the theme component, go to the Storybook.

When designing for inline theming, you’ll need to pull assets from the other theme library files or use the theme switcher Sketch plug-in. Assets will have the same tokens names across libraries but will show different values. Specify in the design deliverables which sections of the page will be using an inline theme. 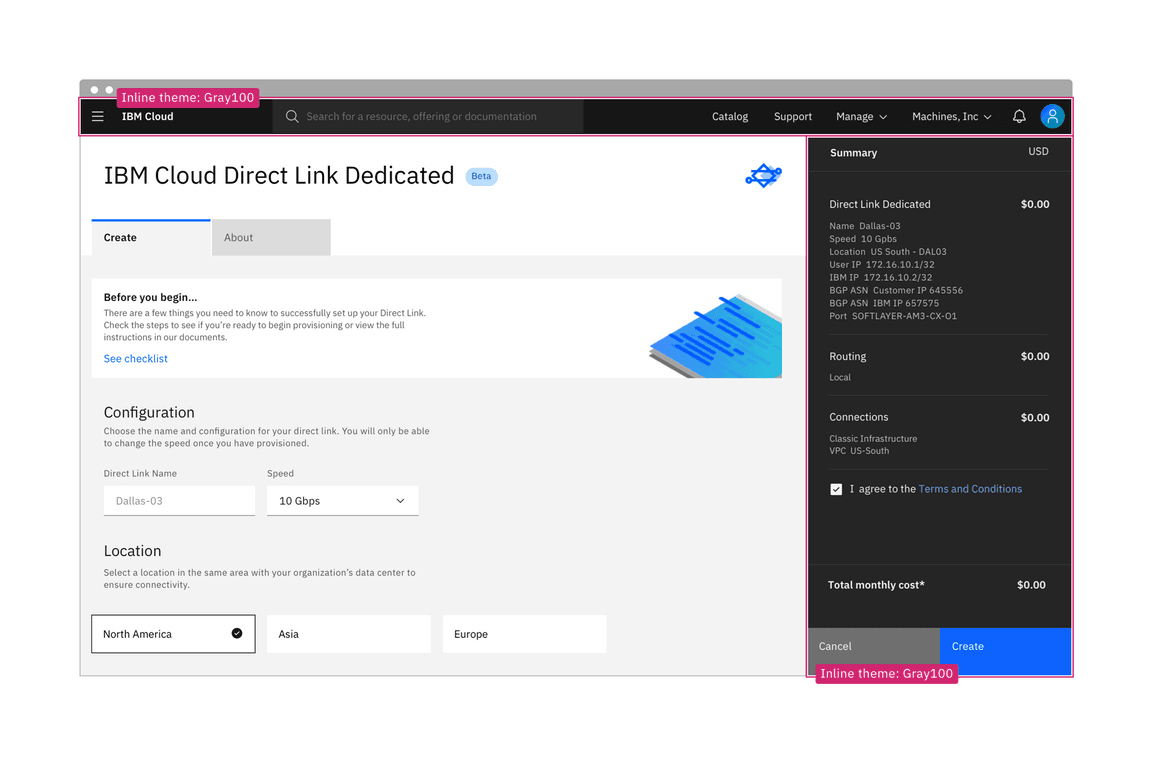 When to use modes

Adding the ability to change between a light or dark mode in your product is not required as an IBM product but is highly encouraged. Attention to detail, customization, and being at the forefront of innovation separates IBM over our competitors.

For some users, choosing light versus dark mode is more than an aesthetic choice. While some research shows that unimpaired sighted user preform better in light mode, it also shows that dark mode is better for people with cataract and related disorders. Dark mode emits less light and can therefor reduces eyes strain and help prevent headaches and migraine.

The themes use color tokens to interpret which values are needed for each theme. It is the color tokens that allows a UI to so easily switch from one mode to the next. You cannot implement light or dark mode without using color tokens everywhere in your product. Hard coded values will not change when the mode is switched. 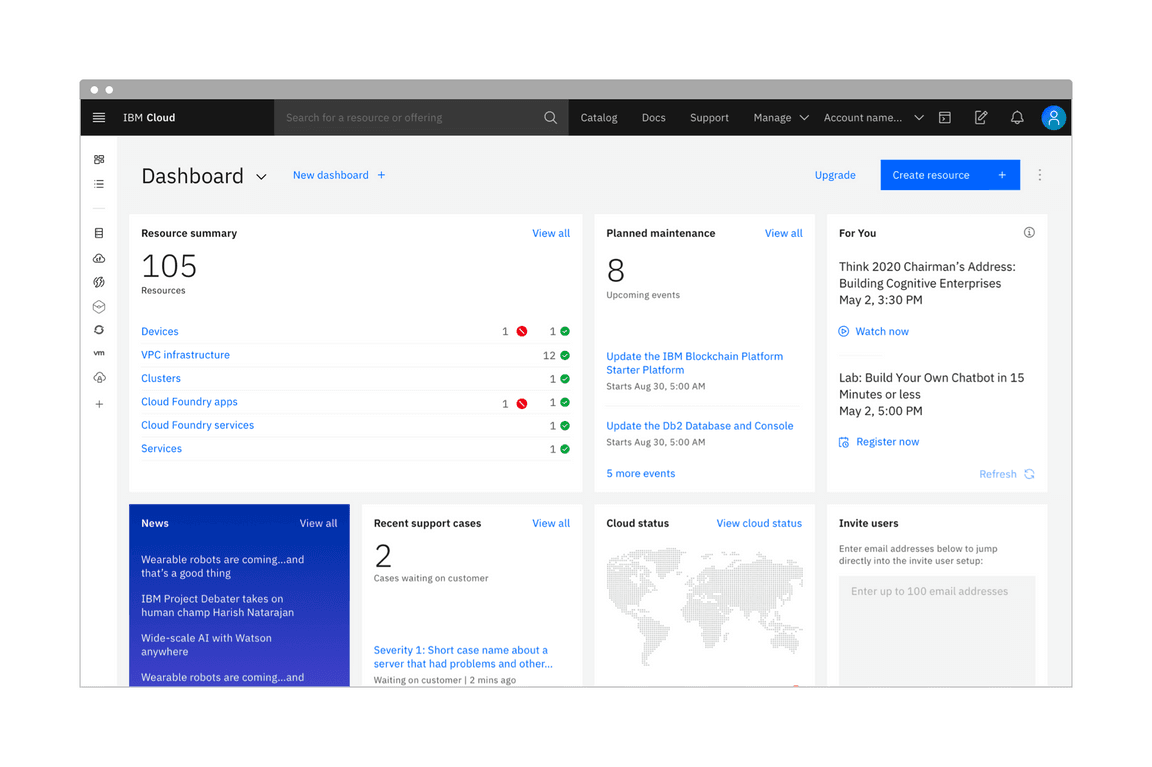 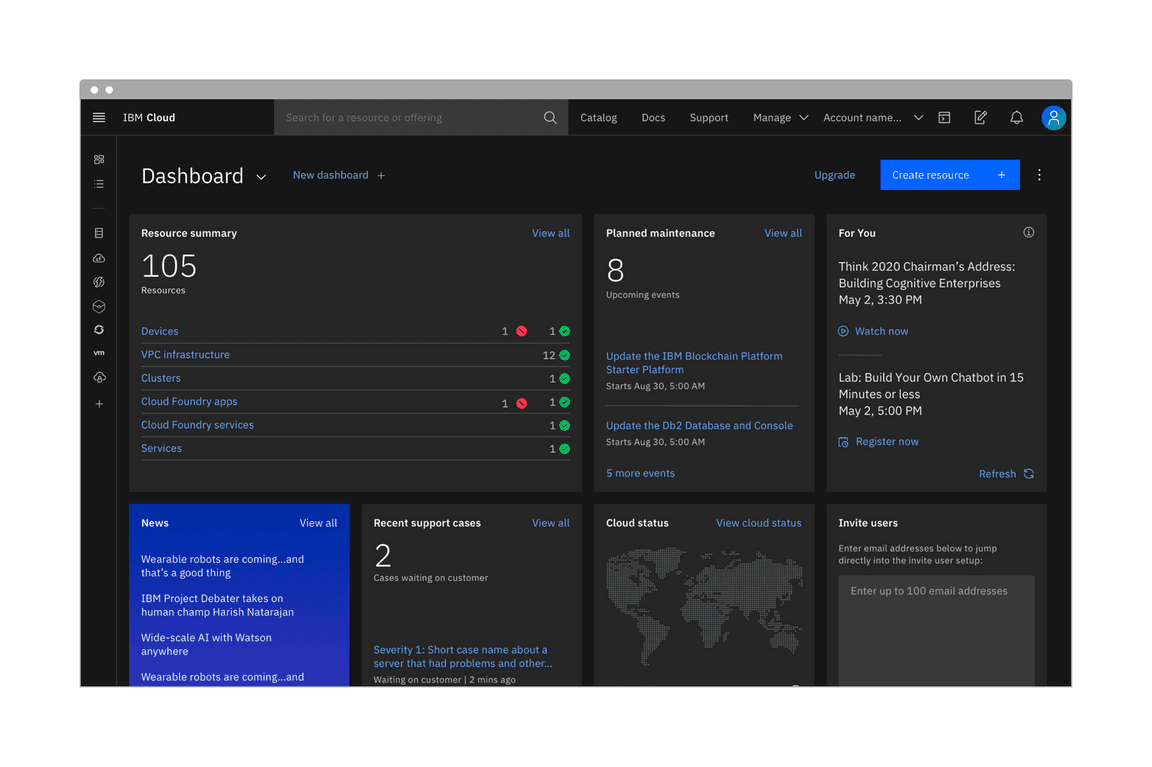