Complex charts are a powerful way to display complex data sets. While less intuitive than basic charts, the visualizations should still tell a story the user can understand.

Alluvial, or Sankey diagrams, are a type flow diagram designed to show two indicators of a dataset and how records distribute among them, highlighting correlations.

Multiple blocks of two indicators can be placed next to each other creating a wider alluvial diagram but it’s crucial to consider that this specific kind of chart does not show correlations between indicators that are not directly connected. This is usually emphasized using a different set of colors for each block.

A heat map is a two-dimensional visualization in which individual values contained in a matrix are represented as colors. This technique makes it easy to visualize complex data at a glance. When it comes to heat maps, the most common color ranges are expressed in either sequential and diverging color scales according to the type of data represented.

Sequential scales use a blended progression, typically of a single color, from the lowest contrast to the highest contrast values, representing lows to highs. It’s best practice to use a sequential scale with values that are all positive or all negative. Sequential heat maps can leverage the full range of the palette (from 10–100) to maximize contrast. Please note that the 3:1 minimum contrast requirement does not apply to heat maps.

When cells get extremely small, a white border can hinder the intended effect.

Axis ticks and legend can be used to leverage the chart potential giving the users additional information and dedicated kinds of interaction. 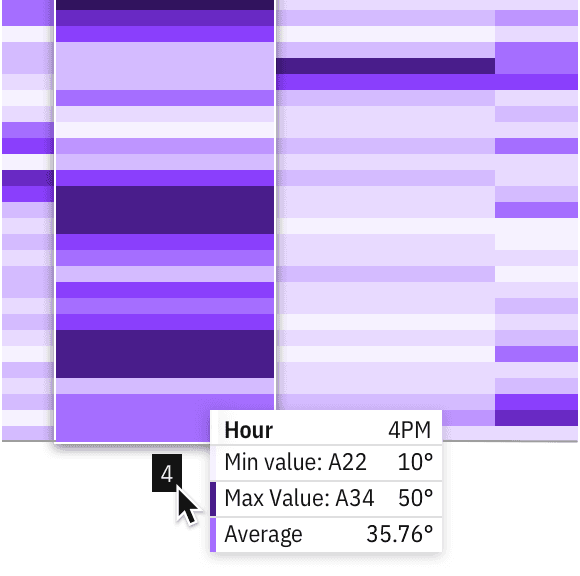 Diverging scales show color progression in two directions: dialing down the contrast of the first hue from one end to a neutral color at the midpoint, then increasing the contrast of the second hue to the other end of the scale. The neutral midpoint is often referred to as the “inflection point” (for example, a 0 value midway between -100 and +100).

While min/max values can be automatically detected from data, inflection points can vary depending on data type. We default to zero in order to accommodate the most common cases and include a feature flag within the code to specify exceptions. The data for a divergent heat map does not need to be symmetrical on either side of the inflection point. For example, the data set could have a zero value between -20 and +100 as well.

A network diagram is a way of visually representing network architecture. It maps out network structure with a variety of icons and connecting lines. It’s ideal for sharing the layout of a network because the visual presentation makes it easier for users to understand complex connections at a glance. These diagrams are especially useful for isolating problems or when designing a new system.

Note that Carbon Charts does not provide layouts for diagrams. You can utilize these components alongside graphing libraries (such as elkjs), or by composing your own layouts. 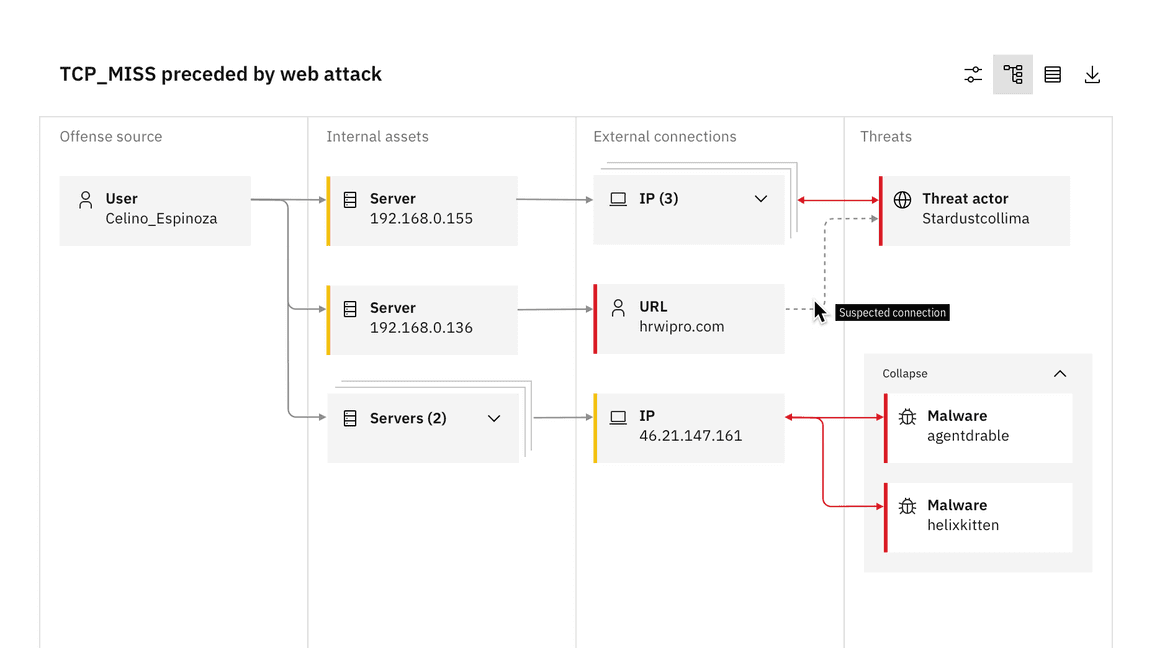 Example of a network diagram in a swimlane graph from QRadar

This specific network diagram is comprised of parent and child nodes. In the QRadar example, parent nodes convey the story of what happened in an investigation and can be clustered based on relationship type. Child nodes appear under parent nodes and can also be clustered.

Network diagrams use the same scale controls that apply to the rest of the data visualization components, however they appear in a floating tile, enabling the user to zoom and pan simultaneously. It’s also helpful to include the expand and collapse all nodes feature, which gives users the ability to easily navigate between detailed and high-level views of the diagram. 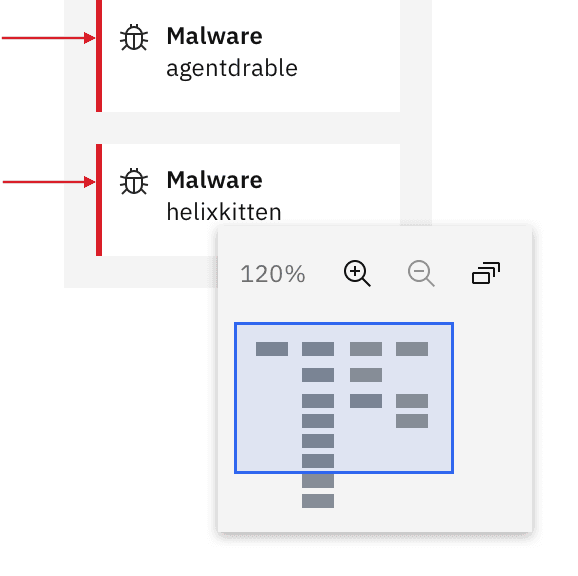 Parallel coordinate charts visualize individual data elements across multiple variables. Each variable corresponds to a vertical axis and each data element is displayed as a series of connected points along the axes.

The parallel coordinate chart is the equivalent of a radar chart with axes — making it preferable for many use cases. Its strength is that each variable can be completely different and even have its own scale (the units can even be different). 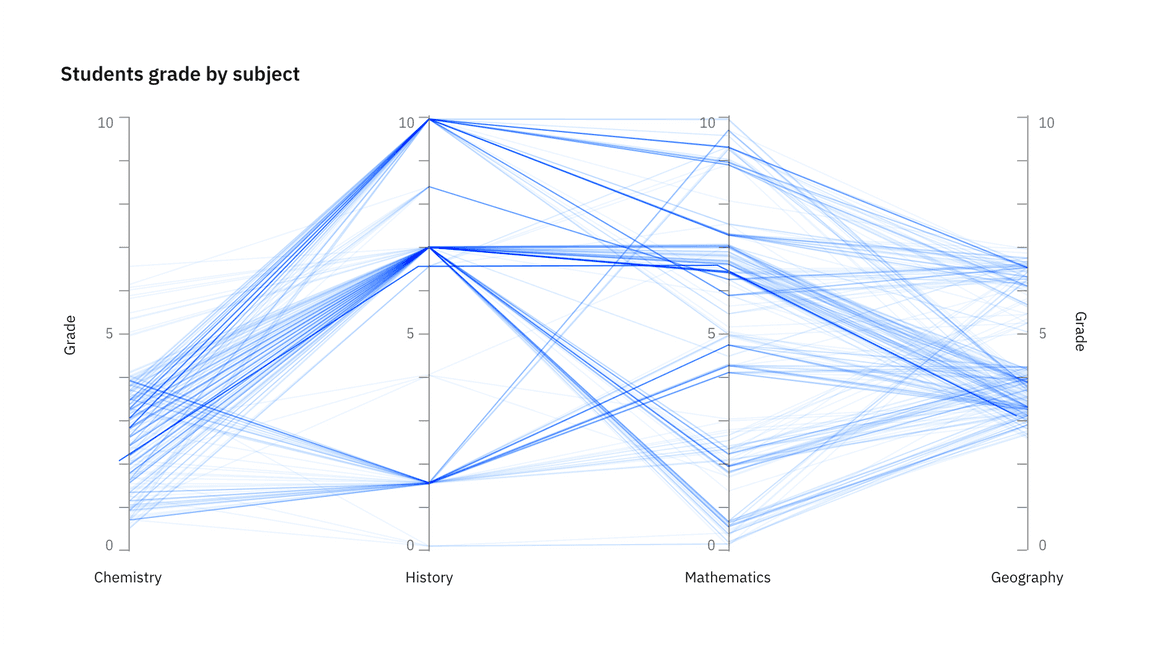 Hover effects that highlight a specific group or axis can be added to enhance basic parallel coordinate charts. These charts can also include interactive features like the brush component. By clicking and dragging along any axis, you can specify a filter for that dimension. The brush component is also used in the updated scatterplot matrix example. See the detail below. 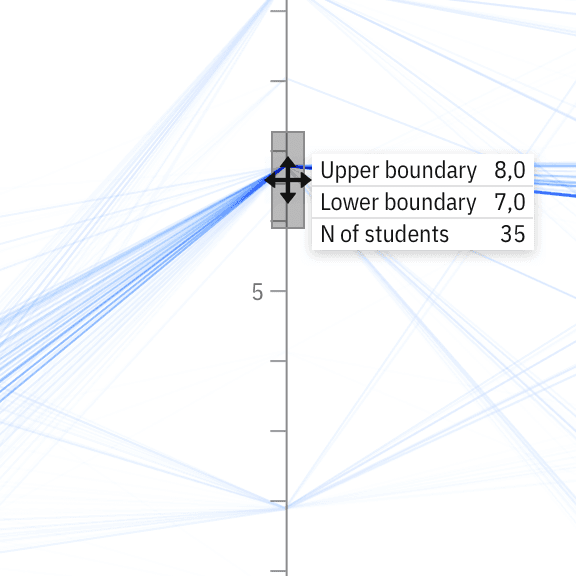 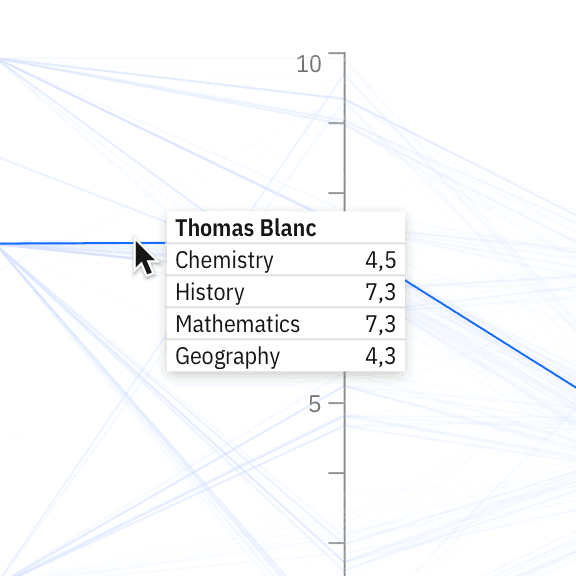 Detail of a comparative tooltip interaction on hover

Carbon Charts supports both tree diagrams and dendrograms. Although the two are very similar, dendrograms tend to offer a more responsive layout for varying screen sizes.

Tree maps can work for visualizing a part-to-whole relationship among a large number of categories—as long as the data is hierarchical and exact comparisons between the categories is not a primary concern.

When dealing with large amounts of data in a constrained space, tree structured nodelink diagrams (like the network diagram shown above), grow too complex to be useful. Tree maps provide an attractive alternative by maintaining a hierarchical structure while displaying rectangular quantities for each category and subcategory via area size.